October is now well upon us, and it is one of my favourite, thanks to a combination of fallen orange  leaves and a surge in horror films. With films like The House At The End Of The Street and Paranormal Activity 4 released this month, there’s a lot going on cinema-wise to get into the Halloween spirit, some scarier than others- and some possibly scary for the wrong reasons. While I really enjoyed the charming and beautifully shot ParaNorman, I’m less intrigued by the Adam Sandler infected Hotel Transylvania, or the eighteenth instalment of Paranormal Activity. And even though I may be cynical, it’s true to say that every year around Halloween, the cinema releases tend to be hit and miss, so sometimes it’s more beneficial to go back to older films, and have a choice of some classics, or your favourite films.

So whether it’s the cost of a cinema ticket, or that serial mood killer that is the Irish weather, your couch and some hot chocolate are calling! And if you find this is the case, then here is a list of some older films that are appropriate this month.

For me, this film never gets old. As dated as the clothes and even the dialogue may be,

this is Halloween cinema perfection for me. Starring Jamie Lee Curtis, directed and also written by Carpenter, it is an independent film but became hugely successful, and has inspired many slasher films since its release. From the infamous score- and that refrain composed by Carpenter himself- to the long, lingering shots, this film is more suspense and tension than actual violence, blood, or guts. It also gives me that strange nostalgia for a Halloween that once was- with pumpkins, orange leafy autumn streets, hand crafted children’s costumes and perfect suburban homes- that amazing false nostalgia that tricks you into feeling as though you once lived in the American suburbs. Ah, what a simpler time. Well, apart from all the murders.

Bonus- the plot, the tension, the exposition of Halloween all makes it great seasonal watching, but one of my favourite moments is that sex scene between Lynda and Bob, when, after wriggling around on top of her for approximately 2 seconds, Bob climbs off Lynda and just lies there looking bored. Ah, young love.
And let’s just pretend that the Rob Zombie remake never happened, ok? Thanks 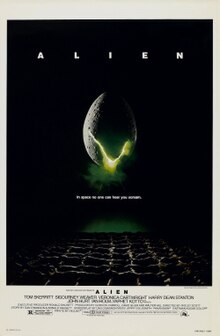 Perhaps not a typical Halloween film- or maybe moreso that it isn’t thought of as one, but like Halloween, it is one of the first successful slasher films, and stars the always amazing action hero Sigourney Weaver. Alien is another film to feature what Hollywood later dubbed the ‘final girl’- that is, the female hero who is a lone survivor after all them killins’. The violence and horror is made more tense however, since Ripley is for the most part confined to a spaceship, and so other than fling herself out into space (not recommended) she has limited possibilities of where to run. Yep, that pretty much escalates the whole “don’t run upstairs, he’ll find you upstairs!” deal that results from most slasher films.  Also like Laurie in Halloween, Ripley had a pretty hard time of it, what are the odds that various aliens would be after your life on FOUR separate occasions over four films? (Although I’d like to forget that third one).

Maybe not the most fun movie to watch in groups, but if you want a genuinely good tense watch, this is it.

This is definitely one to watch with a group.  Susan Sarandon (as the naive Janet Weiss) has her innocence taken after she and her fiancé Brad enter a house which turns out to be full of singing, dancing sexually driven aliens from the planet transsexual. Just the basic plot of any old film, you know? Not so much a Halloween movie in amount of scares, but in gimmick and costume it is a definite seasonal watch- and isn’t gimmick and costume the definition of Halloween? You’ll have all of the songs etched in your mind for days, and practicing the Time Warp at home is always fun! A perfect blend of silliness, laughs and music, some of the most fun you can have watching a film with friends. (Oh, and Tim Curry as the transsexual Dr Frank en Furter -see what they did there- has amazing legs. )

An absolute classic! No, but this film made it onto my list not because it is what people in the industry might refer to as a good film, but because it is just so stupid that it’s entertaining. Like Rocky Horror, Teeth blends comedy with horror, but perhaps with what you might call some slight artistic differences. I watched this a few years ago around Halloween with some friends (there was drinking involved, sure) and it was pure entertainment. American teen drama? Yes. Clunky dialogue and even clunkier acting? Yep. A girl whose vagina has rows of sharp teeth and who goes around biting off any man’s penis who wrongs her? You bet. WAIT, WHAT? Yes, that’s the basic plot of this film. It begins as a Dawson’s Creek-esque drama; Jess Weixler’s character Dawn is a member of the abstinence club in high school, but after an attempted rape gone awry (she accidentally bites of the culprits penis, saving herself, but killing him) her vagina pretty much goes on a spree, biting penises all over town. If you’ve always wondered why there was never enough aggressive vaginal action in your teen dramas, then you’ll really enjoy this film.

This was one of the first ever, films by New Line Cinema, you know, that little studio behind the Lord Of The Rings?

A Nightmare On Elm Street spawned a huge franchise, which is still alive today, in various mediums, and comprising of 9 films to date. Itis another slasher film, though not exactly in the same tradition as some older ones like Halloween. This film ticks pretty much every box you have for the ultimate Halloween movie- Stereotypical teens doing stereotypical things are interrupted when the amazingly creepy Freddy Krueger (played by Robert Englund) comes after them in their sleep. It’s all made a bit weirder when you understand that Krueger is in fact s pedophile- or was, when he was alive. It’s a fun and somewhat dated film that will probably have you laughing as much as squealing. The premise is pretty amazing, and brings about many questions with regard to illusion and reality.
Oh and it features Johnny Depp, before he was Johnny Depp.

Oh Hitchcock!  I’m a big fan of Hitchcock’s films, and this is possibly his most well

known film. It is perfectly paced, horrifyingly tense, and had a lot of men reassess their relationships with mother (I’m guessing).

Based on the 1959 novel by Robert Bloch, it is written by Joseph Stefano, and one of the first of many films to be loosely based on infamous murderer Ed Gein. It stars Anthony Perkins as Norman Bates, the owner of a Motel where Janet Leigh’s Marion stays, and where the plot’s mystery begins, drawing in Marion’s sister Lila (Vera Miles) and Sam Loomis (John Gavin).  This film offered a lot of firsts for cinema- notably Janet Leigh’s role, and the atypical execution of her character’s arc- but if you haven’t seen it before, I’m not about to ruin it now. This is a gripping film that requires a nice drink, a dark room, and a good atmosphere. It’s the perfect cinema experience, and a truly eerie film, but don’t expect any parties.

And….. we’re back to fun! Beetlejuice is… well, it’s Beetlejuice! I love this film- I love the costumes, I love the set design, I love the acting, and I especially love the dated claymation special effects. This is the sort of film that you can appreciate as a child and an adult- which isn’t always easily accomplished in film. It’s also a bonus to see what Alec Baldwin looked like twenty five years ago, and how skilled Tim Burton was before whatever happened to him happened to him. Winona Ryder is a perfect teenager, and I still feel a bit ill whenever I see Michael Keaton, owing to how well he portrayed the disgusting Beetlegeuse. I genuinely love this film, it’s crazy, creepy, funny and a wonderful premise. It is not a horror film, but it’s undeniably a Halloween film.

In which two young children succeed in drawing me in, and creeping me out. 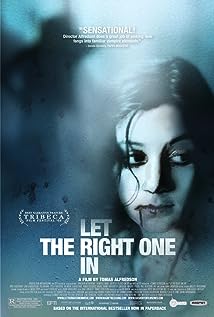 serious children in the world. While Leandersson’s Eli is gripping as a vampire, Hedebrant as Oskar succeeds in being chillingly dark as a frequently bullied boy living in the Stockholm suburb of Blackberg with his mother in the early 80s.

The film begins when Oskar, a lonely boy who has grown so resentful of his bullies that he dreams of vengeance, meets Eli, who appears to be a girl his age, and who has just moved in to the apartment next to him with a mysterious man. The two quickly form a close bond, and Oskar discovers Eli’s secret.

This is a really chilling film, and I don’t just mean because of its cold Scandinavian setting (ugh, I’m sorry!). Unlike the tradition of many horror films or other Halloween watches, Let The Right One In is a great dramatic film, which just happens to be filled with mystery, suspense and downright creepiness. Some parts of the film seem a little out of place, as they don’t get the same explanation as with the novel on which it is based, but for the most part the plot is maintained with finesse. Alfredson gives us a nuanced portrayal of both the difficulties of puberty, being unpopular and all this entails, as well as those involved with being a blood-thirsty vampire. The difficulties of both are given equal weight, and through these we are able to see the strange dichotomy present between innocence and wisdom.  If you’re eager for a change to the traditional Dracula or vampire tradition in film, then Let The Right One In serves to upturn this in pretty much every way. You’ll find that you are simultaneously engaged by the characters but also suitably turned on edge by them. In this way, and so many others(the relationship between innocence and wisdom, love and hate, life and death, young and old, peace and violence), Let The Right One In is a film full of successful dynamics and opposing forces.

If any of these films take your fancy but you’d still like to head our rather than stay in (what are you, sociable?!) then luckily for you The Sugar Club is screening two of the films from this list- Beetlejuice and The Rocky Horror Picture  Show, with information available here and here.

Give us your thoughts and words Cancel reply